skip to main | skip to sidebar

Sniffing around for more of the less known myths and oddities, I came across the Sucuriju Gigante or Giant Anaconda. Whereas an Anaconda - the heaviest snake in the world - grows to about 30-35 ft the Sucurii apparently grows to way over 60ft in length. The Amazonian tribes also regard it ("her") as the being who created the Amazon. The pictures underneath was taken by a Colonel Rene van Lierde of one of these creatures.....from a helicopter. 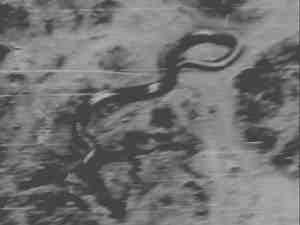 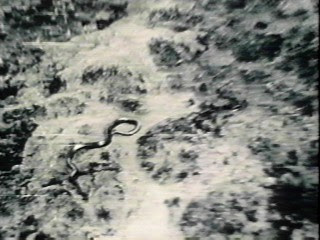 The Sucuriju is basically described as a huge Anaconda that preys on the tribesman and large animals. It's a simple but cool concept for a controllable avatar in a game - put into the body of a huge snake-like monster, you can slither about in the undergrowth and rivers of some deep, dark forest, maybe gathering information and hunting prey when you get hungry (just a concept). It could be the more stealthy of your gaggle of monsters you directly control. I had an idea about the Jersey Devil - it being the offspring of a witch and such, it could be the magic-orientated character of your group and maybe reconnaissance as it's wings could come in handy for gliding and spotting enemies.

I don't have my game idea pinned down for definate yet, but these are just some quick thoughts.

No, they were taken by Colonel Rene van Lierde in 1959. Zoologists have said that the snake is 40-50 ft in length.

It's an amazing picture though.

So, it is snake

I suppose it is a germ

Abby
21 year old female game designer who likes dinosaurs and dragons who just wants to get paid for drawing monsters.